Living on the Severn estuary I’m beginning to accept that perhaps greys are my strong point, probably repeated practice. I’ve always been drawn to a muted palette and love understated painters such as Gwen John and Kyffin Williams. I’ve just had six days of painting with Andrew James and had a great time but his heightened colour palette can be a stretch, but the point of it was to use it as a chance to experiment and improve.

After a bit of warming up with charcoal sketches we dived in with the first painting.

The background was a bit messy so I blocked in the ugly kitchen area roughly then turned the painting upside down and painted the entire background using the shapes only as a loose guide and just went with what looked good.I think it was worthwhile and helped create a less literal and more attractive painting.

I thought my first portrait was a bit conservative in colour and texture. This was partly due to painting over a very turpsy underpainting which was a bit slippy. So with the second painting I sketched in pencil first which kept a drier surface and enabled me to add more definitive, chunky brush marks.

As I know the sitter well I was pleased to get a forceful likeness quickly (but did pass through a Hitler moustache phase). When it came to blocking in the background I thought I’d get a rough idea with a thin layer but basically got carried away with the turps. I think the effect worked well with the loosely painted hair so I went with it and strengthened the areas such as the shoulder with dark turpsy pigment.

This all came together very suddenly and I didn’t want to ruin the loose effect, so after a night to sleep on it and some very minor fiddling in the morning I was ready to start another painting.
Rather than repeating the same pose I thought back to a memory of a Gwen John portrait I’d admired and began work on a full figure in muted colours. The light dropped towards the end of the day after the clocks changing so I thought the treatment wouldn’t be adversely affected by any dimness either.

I am pleased with the outcome, I think it achieved what I’d set out to do. Once again I turned the painting upside-down to abstract the background. Also if you look closely you can see black dots where it fell over onto a charcoal covered floor when I was tidying up, hopefully it’ll just brush off when it’s dry!

Here’s the Gwen John portrait from the National Gallery that I had in mind when I set out. I wanted to rip it off the wall when I visited this year. Don’t compare too closely, it’s just a thought I had in mind! I didn’t look at it before starting the painting so it’s interesting to see them side by side after the event. Stronger textures, a bolder cut off composition and obviously talent make it a fabulous painting  but nevertheless a useful exercise to compare. 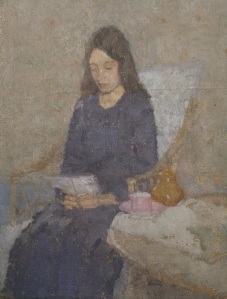 If you’d be interested in joining the portrait course next year you can find out more and register interest here https://ianpriceart.co.uk/andrew-james-course/