The Curzon Cinema is one of my favourite places to visit so it’s been great to be invited to help raise funds for repairs by painting a roof tile for auction. There are some amazing works already up on the Art in the Tiles page including several from the Aardman studio who are great supporters of the Curzon.

I think I’m right in saying it’s the world’s oldest continuously running cinema having opened in 1912, every visit is an event.

One of my most memorable Curzon memories a few years back was broadening my young kids mind by taking them to see a silent film screening complete with live organ accompaniment. What a change from all those Hollywood kids films I thought. I knew that Nosferatu was a classic “vampyre” film and hadn’t seen it before myself, as the story unfolded I grew increasingly uneasy about my idea. The level of tension and terror exceeded my expectations of what a 1920’s silent film could manage, my squirming grew as a lynch mob chased Nosferatu along the dark city streets. I won’t spoil the plot but my kids did survive the experience. Hence the dark theme of my tile.

The Art on the Tiles auction will take place on eBay, starting on Sunday 1 December and finishing on Sunday 8 December. I’ll be dropping off my tile there tonight when I go there to see Monos very shortly [edit. Crikey Monos was intense but a must see and the soundscape was unique].

The RWA Open Exhibition is always a joy and that’s coming to a close on the 1st of December. It’s particularly colourful this year and I’m lucky enough to have my portrait of Andrew Hardwick RWA hanging in a great spot near the entrance in the same space as some of his paintings. Get along while you still can. 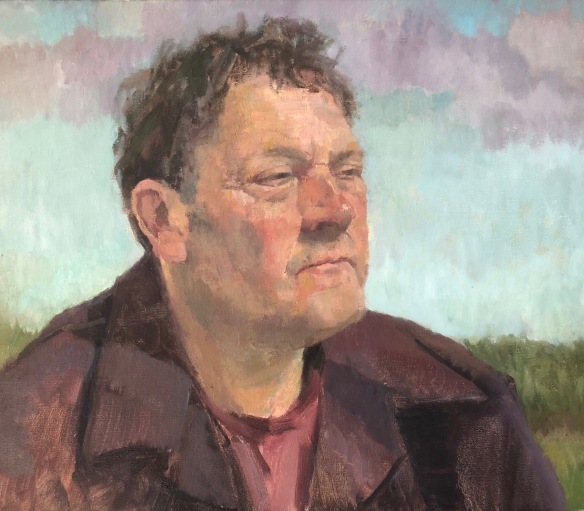